And a behind-the-scenes from The Creators Project: 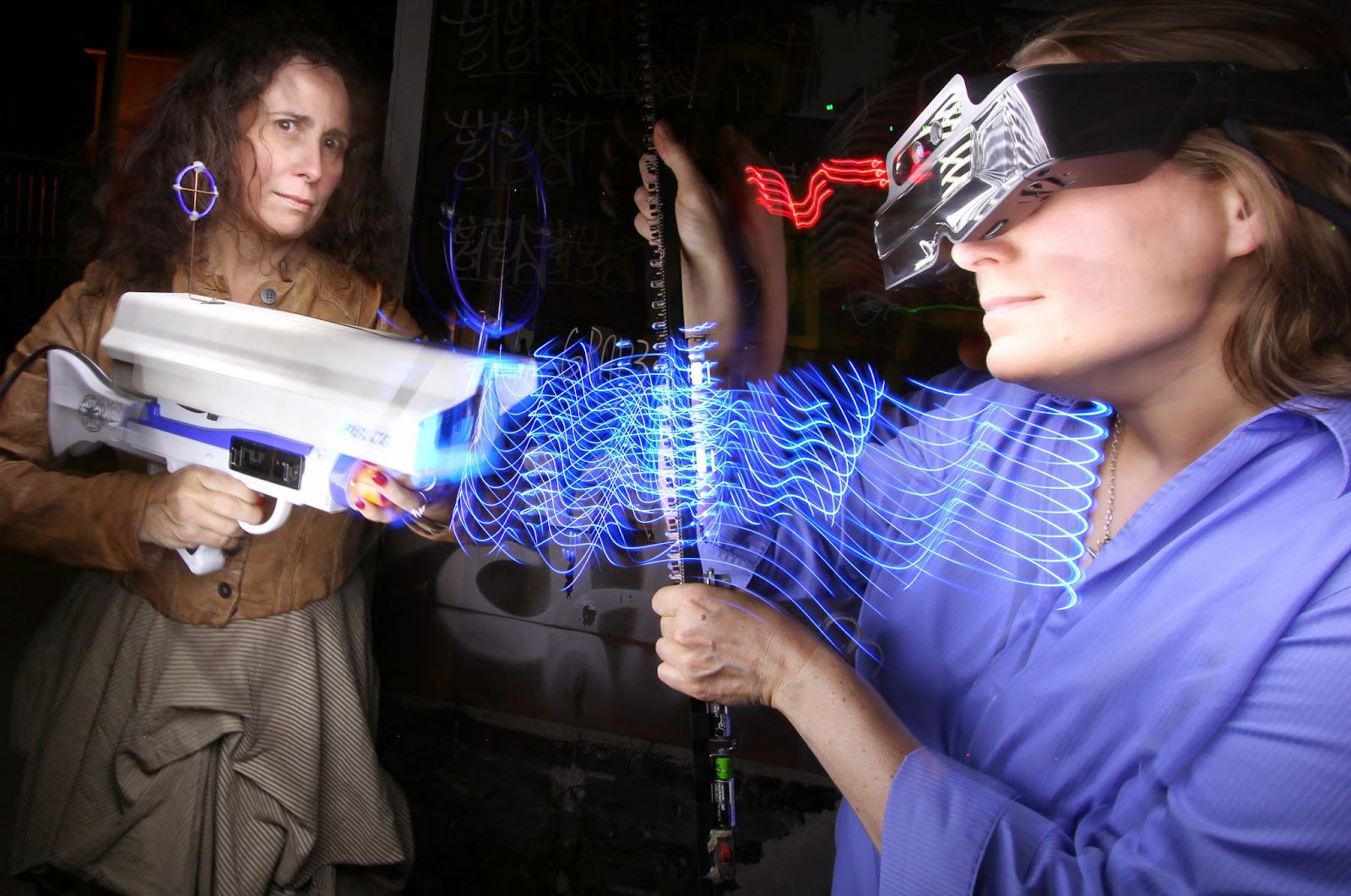 This just in from Ryan Porter of the Toronto Star.

Fun to see Faster than Night and the Theatre@York A Midsummer Night's Dream namechecked alongside a whopping great blockbuster like Dawn of the Planet of the Apes! 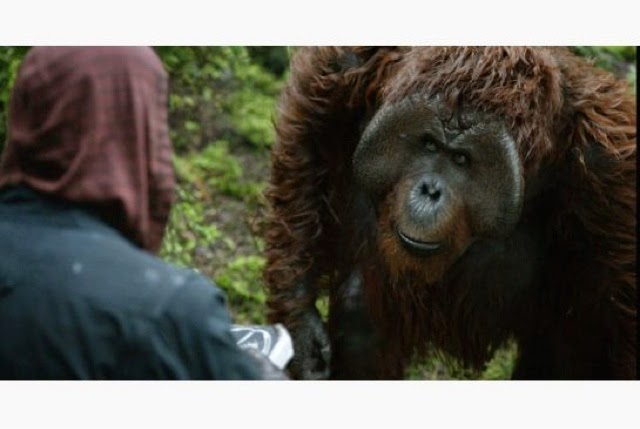 Had a blast at the Playwrights Guild of Canada conference in Montreal yesterday, sharing a panel titled "The Technologized Playwright" with Kevin Cunningham of the amazing NYC-based 3-Legged Dog Theatre + Media Group.

As promised to those couple of folks who missed the beginning, here are the motion-capture theatre videos I screened:

Huge thanks to Elyne, Robin, Rebecca, Tina, and everyone else who put together such an enjoyably brain-bursting day!

Faster than Night in the Media

We've had some fantastic coverage of Faster than Night this week. The first is an interview with Pascal Langdale and me by Harbourfront Centre's Margaret Evans, in a fast-paced video by Riley Wallace:

And Jon Kaplan wrote a thoughtful preview of the project in NOW Magazine: 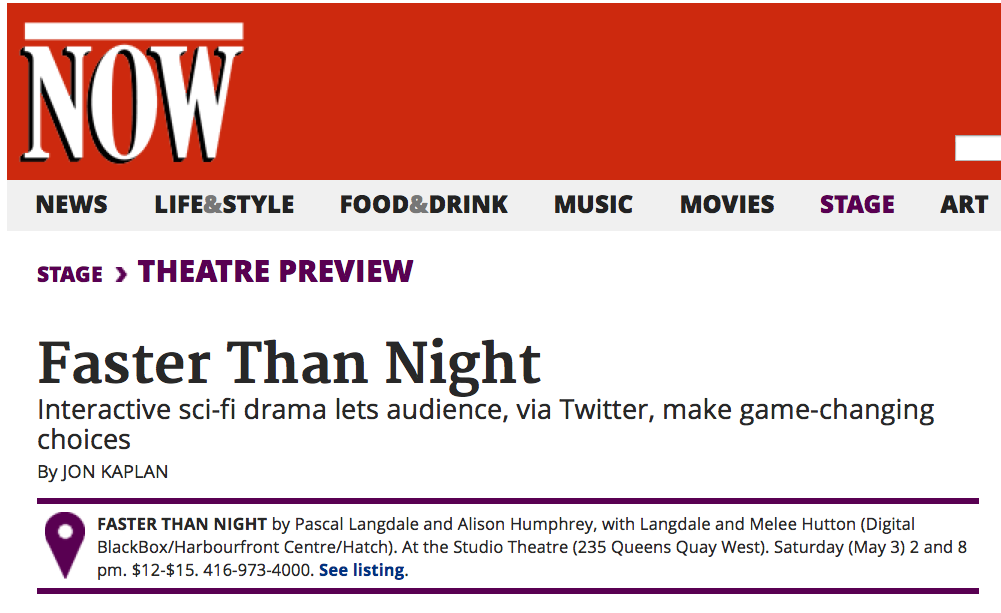 One day till showtime!

Major Tom gets all the airtime, but there's a whole lot more going on backstage in Houston. Meet some of the amazing tech crew on Faster than Night. 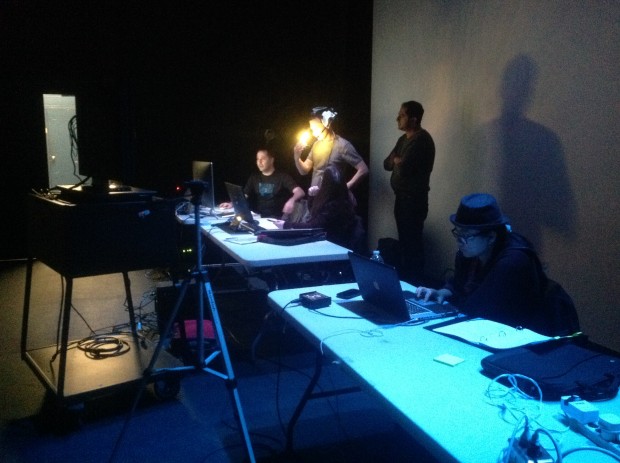 Organic Thoughts from an Artificial Intelligence


(Originally published on praxistheatre.com as part of Harbourfront Centre's HATCH 2014.) 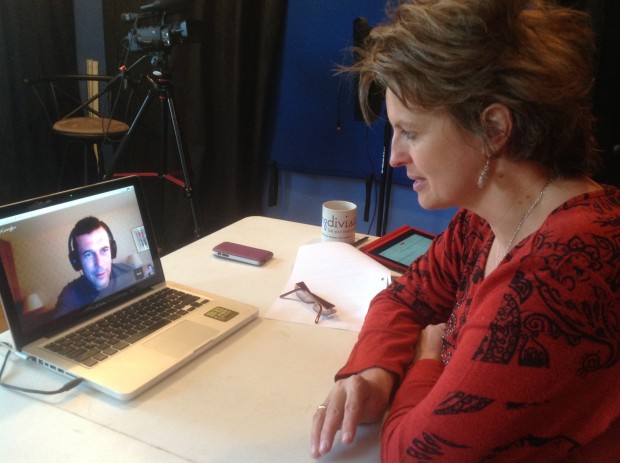 Working on Faster Than Night has been a literal education for me. Not just in the field of social media, where my knowledge hovers somewhere around my own Facebook page and not much more, but also in the world of artificial intelligence.

Playing a quantum A.I is flattering but daunting. Along with it come actor questions I’ve never asked before, but perhaps will ask more often in the future.


"Naturalism is a good word for a bad idea. Art is to do with transformation."

In our first and latest posts, we explored how motion capture and real-time animation works. But we haven’t really talked about why one would want to use it in live performance, or what stories it tells best.

These are key questions. Live animation takes a lot of extra work and costs a bomb. It makes it hard to describe the show to theatre audiences (other parts make it hard to explain to game designers and 3D animators). And it affects the story in a fundamental way. Or at least, it should. Otherwise you’re just sprinkling digital pixie dust on top of a play and hoping no one will notice the story would be better told in television or videogame or non-mocap-theatre form.

Throughout the script development process we’ve asked again and again: why are we telling this story with this technology?


As far as we're aware, Faster than Night is one of the first handful of theatre productions in the world to use facial performance capture live on stage. But while from one perspective it is cutting-edge technology, it is also just the latest mutation of an artform that has been used in theatre for millennia: the mask.

A longer post is coming soon with details on the 3D facial model work being done by Centaur Digital and Dynamixyz, but to tide you over, here are a few more elements from our talented creative team.

First up, the design of the starship Envoy by Mike Nesbitt and Caroline Stephenson of Capture Scratch: 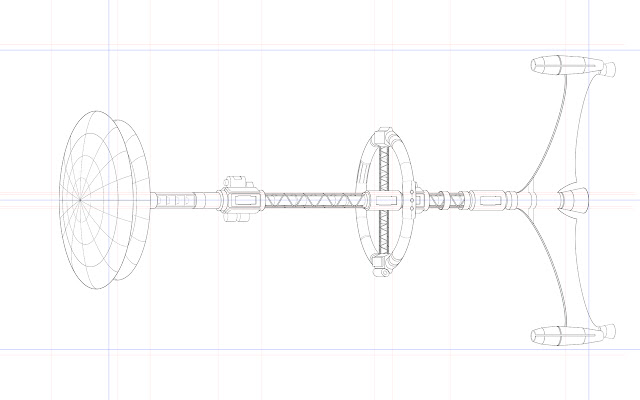 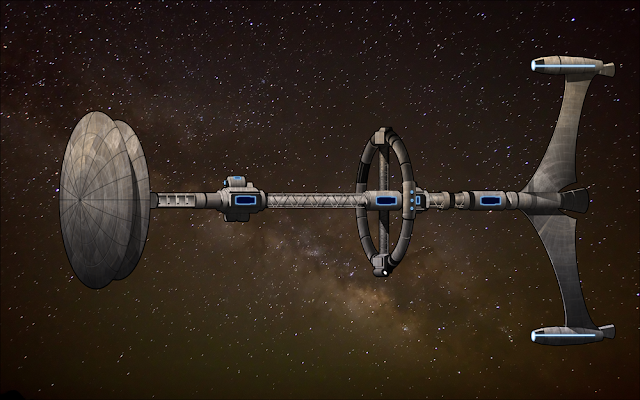 Next, "Like Clockwork" by composer and audio designer Will Mountain, via Vapor Music:

In the UK, I’d be called a “jobbing actor”.  That means that I work across all sorts of media, picking up a wide variety of acting work that provides a steady income.  I have worked in corporates and commercials, stage, film and TV, and interactive games. Going a little further back, I have published poetry, written a radio play, co-produced movement-based theatre, headed a flamenco company, and once danced with Cyd Charisse.  In my early thirties I studied nonverbal behavior and re-appraised my acting techniques.  When I say I’m a RADA graduate, I sometimes think people expect a more traditional actor – a style or a working process which I can also embrace when necessary.

Every form I've worked in has certain established rules and conventions, developed over years (or centuries) to serve the best interests of storytelling within that medium. Each has its own artifice, relies on a shared experience, and requires adaptation of the core craft of acting.

So it was with a jobbing actor’s irreligious approach that I made friends with the newcomer on the storytelling scene: performance capture.  In this medium, the rules and conventions are still being established, found wanting, re-established, changed, superseded and hotly debated. 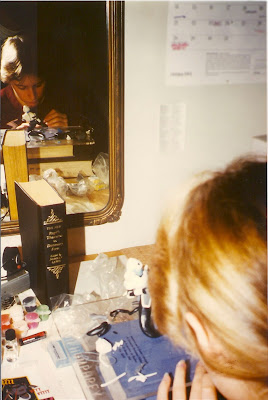 When I was sixteen, there was a comic convention in downtown Toronto. This was way back before comics were cool, a good decade before the invention of the web let geeks find each other en masse, and longer before the San Diego Comic-Con went media-tastic and started attracting 130,000 paying attendees. We're talking the basement of the Hilton, a bunch of folding tables with dealers selling back-issues from boxes, and a special guest or three.

I was a huge fan of Marvel Comics's Uncanny X-Men, which was ahead of the curve in introducing multiple, powerful female superheroes.

(One of those heroines, the teenage Kitty Pryde, was the original protagonist of one of my favorite X-Men storylines, "Days of Future Past". Yet when its blockbuster movie adaptation is released next month, the very male and very box office-friendly character Wolverine will be taking her role in the narrative. That's a different blog post...)

Okay, I usually love Mike Rugnetta's brain-romps for PBS's Idea Channel, but this...

We've got a new site up for Faster than Night, linking to all the show's many online presences:

Mind, Muscle and the Music of the Spheres

(Originally published on praxistheatre.com as part of Harbourfront Centre's HATCH 2014.)
When you're writing a science fiction story about wormholes and time travel, sooner or sooner you're going to bump into Stephen Hawking. The world-famous physicist and Brief History of Time author even has some theoretical black hole quantum-effect radiation named after him, for heaven's sake. He's just. that. good.

But there's another resonance with Faster than Night that we didn't anticipate. Hawking, like us, uses facial-capture technology. 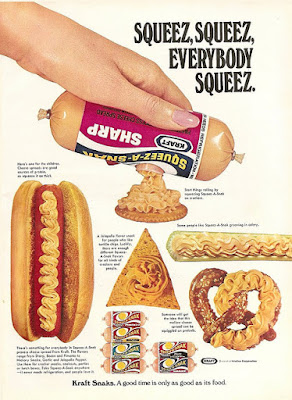 Earlier this week, ISMEE, the artificial intelligence on board the starship Envoy, issued an invitation and a challenge:


Want to travel faster than light? Apply to #Fastronauts today: include your name, hometown, and favourite freeze-dried/squeeze-tube food.
— ISMEE the A.I. (@ISMEEtheAI) March 19, 2014

And you know there's nothing people like better than tweeting their #foodporn:

Staged in March 2013, it used facial motion capture to live-animate a 3D computer-generated donkey head for Bottom, among other way-cool tech-driven fairy magic.

I wrote the blog Action Refraction during the process from 2012-2013, using it as a place to collect and share tech and creative inspirations and other musings with the company.

That utterly fabulous and nerve-wracking experience taught me a huge amount about using bleeding-edge technology in live theatre, but clearly not enough not to do it again...

In 2009-2010, I wrote a blog while assistant directing on Carey Perloff's production of Phèdre at the  Stratford Shakespeare Festival and the American Conservatory Theater.

Here are my favourite posts from Phade Up:

Farouche: Phedre and the Half-Blood Prince
This one's a threefer. Originally three blog-posts long, and with lots of pictures, but it does manage to tie ostrich feathers to tall sharpened stakes and still make sense at the end.

The Hitchhiker's Guide to Trezene
Anyone who's ever vented their spleen on the leaves of a myrtle will be able to relate.

Need to Know
For the fanboys and girls.

Clouds from Both Sides
Translation fun with BabelFish.

Alexandrine in Five Times
Wondering how Hippolytus would sound spilling his guts to Aricie in the language of love? Contains not one but two clips of Phèdre in the original French - one from 2003, and one circa 1968, complete with jaguar skin!

And a two-part look at a parallel story from Scripture, full of sex, lies and video of Donny Osmond:
Hell Hath No Fury like Potiphar's Wife and When Love Gives You Lemons.